From 1960 to the end of the decade, consumption of fresh vegetables dropped nearly 8 pounds per person, and per-capita consumption of fresh fruits fell more than 15 pounds. Fresh produce needed a shot in the arm. Supermarkets, which threatened to dismantle the structure of the industry decades earlier because of their power and direct buying, held the answer.

Taking it to the people

It came in the form of untapped potential—merchandising and marketing directly to consumers. United Fruit Co.  had pioneered this idea in the 1940s with the wildly popular Miss Chiquita character—and the shift in 1970 was palpable. Merchandising efforts using the iconic figure were so successful that the company changed its name to Chiquita Brands Inc. in 1970. As early as 1962, The Packer debuted a special section on merchandising, a move that would eventually lead to an entire separate publication on retail merchandising trends in the 1990s that continues to     this day.

Companies began to formulate displays specifically for merchandising at retail. Chiquita, for instance, introduced a “banana box” merchandiser in the mid-1970s—a massive framed display of pegboards with hooks that hung as many as 60 bunches of bananas in rows to put the fruit front-and-center for consumers.

Southern California retailer Vons featured logical fruit groupings as a way to attract customers. “By grouping related items, such as dried fruit with fresh fruit, Vons works to arrange a store in a manner logical to its customers,” noted the company in The Packer in the early 1990s.

Meanwhile, messages about fresh produce were also being broadcast on television and radio. Joe Carcione, a down-to-earth produce expert with a wholesale business at the Golden Gate terminal market in San Francisco, helped to drive interest in nutrition with his short TV spots and newspaper columns as “The Greengrocer” in the 1970s and 1980s. Carcione would showcase new commodities and share tips on when to buy or how to prepare them. In Cincinnati, Claire Castellini Thornton—“the produce lady”—(and granddaughter of wholesaler J.J. Castellini) did the same, promoting fresh produce on TV, radio and in the Cincinnati Enquirer.

In the mid-1970s, the United Fresh Fruit and Vegetable Association increased its membership dues, allocating a portion of the funds to fuel a new effort promoting fresh fruits and vegetables—The Fresh Approach. This program focused on public service announcements on radio and TV, including its own show “Cornucopia.” 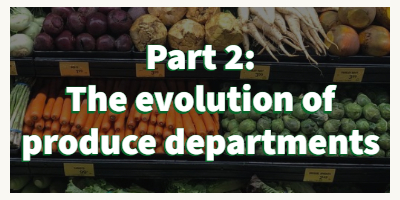 Report: 100,000 restaurants down or out from pandemic effects