The relief of reaching a new  tomato suspension agreement between Mexican tomato growers and the Department of Commerce has come with misgivings from importers over the effect of a provision calling for mandatory inspections at the border.

While pleased the draft agreement will end duties on Mexican tomato shipments to the U.S., the Fresh Produce Association of the Americas said it was “profoundly concerned” the plan appears to require inspections of up to 92% of all tomatoes from Mexico at the U.S. border. The FPAA is basing its estimate on U.S. Department of Agriculture shipment numbers.

The Commerce Department, however, disputes that number, estimating that 66% of the imported tomatoes are subject to inspection.

The five-year agreement is in a public comment period and goes into effect Sept. 19.

Living with the deal

The Florida Tomato Exchange called the new agreement “strong,” replacing 23 years of suspension agreements that “never worked to protect American tomato growers from injurious dumping of Mexican tomatoes,” according to a statement.

The group commended the Commerce Department and the Mexican tomato industry for an agreement that recognizes the need for stronger enforcement.

“The new tomato antidumping suspension agreement includes major provisions requested by U.S. growers to improve enforcement and monitoring of the agreement,” according to the statement. The Mexican industry conceded on core provisions such as border inspections of all Mexican round, roma and bulk grape tomatoes, according to the statement, along with improved compliance and monitoring tools.

Importers will be entitled to reimbursement of cash deposits made from May 7 to Sept. 19, according to the statement. Mexican tomato growers have been subject to a 17.56% antidumping duty since May 7. The Department of Commerce in late July announced a preliminary dumping margin of 25.28% on Mexican tomato imports, which is set aside with the new reference prices.

According to the Commerce Department, the 92% figure cited by FPAA is inaccurate because it includes tomatoes-on-the-vine (TOVs), which are excluded from the near-the-border inspection requirement under the draft agreement.

Instead, Commerce estimates that 66% of Mexican tomatoes will be subject to inspections. 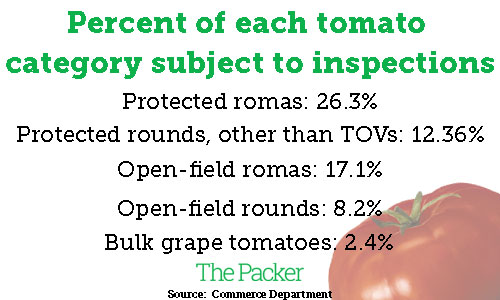 The Commerce Department bases its estimates on 2018 USDA Tomato Fax Reports and a Florida Tomato Exchange estimate that on-the-vine production accounts for 70% of protected round tomato shipments.

Lance Jungmeyer, president of the FPAA, said in an e-mail that he believes the Commerce Department’s estimate falls short of reality.
Jungmeyer said there is “no way” that tomatoes TOVs make up 70% of all adapted/controlled environment — non-field grown — round tomatoes (which he said are the two categories that could be considered “protected” agriculture).

Most round tomatoes come in 25-pound boxes, not in clamshells of TOVs, he said.

Jungmeyer said the department has mistakenly relied on “every statement from the (Florida Tomato Exchange) as gospel,” suggesting that actual inspection numbers would be higher than estimates from the Florida gruoup and Commerce Department.

The FPAA believes the inspections have the potential to destabilize the U.S. tomato market.

“U.S. importers and marketers of Mexican tomatoes will bear what amounts to punitive costs associated with such levels of inspection,” according to Jungmeyer. “Because of the sheer volume of tomatoes shipped north from Mexico to the U.S., we can expect the inspections to create substantial delays that compromise the quality, affordability and availability of tomatoes to American consumers and will create bottlenecks for other goods crossing the border.”

Jungmeyer also said that while FPAA commends the Commerce Department and tomato producers in Mexico for months of work to revise the tomato suspension agreement, the association urges consumers, importers and other American companies to consider concerns during the comment period.

The heightened inspections are slated to start about six months after the new tomato suspension agreement goes into effect, if the deal is finalized on September 19.

“The inspection provision is essentially a non-tariff trade barrier whose ripple effects will not only damage the U.S. tomato market but many other industries that trade with Mexico,” Jungmeyer said in the statement.

Tomatoes, he said, make up almost 20% of produce imports that flow from Mexico through the Nogales port of entry. Increasing the volume of tomatoes to be inspected there will create bottlenecks for all goods at the border, according to the FPAA. 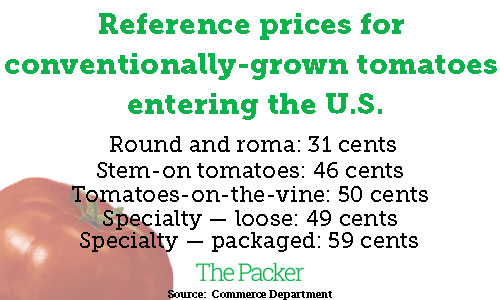 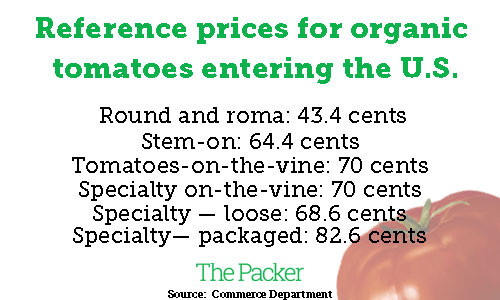 USDA, other groups shift HLB research from lab to grove

Marketscope — Fruit f.o.b.s as of June 1

Summer produce heating up on PMG

USDA, other groups shift HLB research from lab to grove

Marketscope — Fruit f.o.b.s as of June 1

Summer produce heating up on PMG

USDA plans second round of Farmers to Families box contracts