CHICAGO - The red delicious apple has finally tumbled from the top spot of U.S. apple varieties, according to the latest forecast from the U.S. Apple Association.

The red delicious variety is still an important variety for export markets, said Mark Seetin, director of regulatory and industry affairs for U.S. Apple.  However, based on the percentage of red delicious in storage as of June 1 this year, Seetin said that the industry may still be growing 10 million to 12 million cartons more red delicious than the market is demanding.

Both Red delicious and golden delicious output is declining, Seetin said. In 2000, the two varieties accounted for 57% of U.S. production, he said. Today, reds and goldens account for 25% of total output and that percentage is going down.

For 2019, U.S. Apple predicts Honeycrisp production will easily surpass golden delicious and isn’t far from overtaking the fuji and granny smith varieties. Honeycrisp is soon likely to be the third biggest variety by volume, Seetin said.

Leading U.S. apple varieties for 2019, with percentage change compared with 2018: 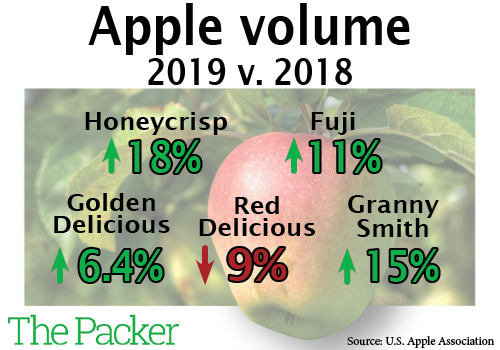 Food and ag startups can apply now for 2020 Grow-NY

Food and ag startups can apply now for 2020 Grow-NY